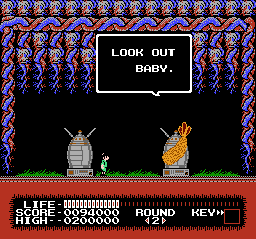 David Cronenberg's The Fly plus Red Lobster equals...
"'Let's mix it up!' says Medusa. Well I guess this game's version of mixing it up is making things slightly normal, because this Medusa fish is the most standard thing I've seen so far."
— JonTron
Advertisement:

Monster Party is a 1989 Nintendo Entertainment System game that follows the adventures of Mark, who embarks on a journey at the request of the alien/bird/dragon Bert to the Dark World. En route, the two fuse together; you play as Mark, but can shift into Bert's form by popping pharmaceuticals. The game is known for its huge number of bosses, many of whom make no goddamned sense whatsoever.

It was developed by Human Entertainment, makers of the Fire Pro Wrestling and Clock Tower series, and, oddly, never saw release in its country of origin. A prototype of the cancelled Japanese release

finally found its way into the hands of ROM dumpers in July 2014.

No connection to the 2018 horror thriller film.