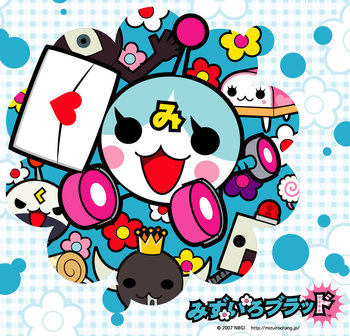 Comical and Sentimental and Death Metal
Mizuiro Blood is a Minigame Game / Action Game created by Bandai Namco Entertainment in 2007 for the Nintendo DS.
Advertisement:

The game revolves around Mizuiro, a plucky young robot, and her endeavors through School to get her Senpai/Kōhai, Kato. Also Mizuiro dies. A lot. The gameplay has a rapid-fire aspect as it mainly involves challenges writing in the Japanese language in short amounts of time, from translating Kanji to filling in the blanks. The game also has moments of relief as small MiniGames are sprinkled throughout the main story, such as Mizuiro moving quickly while avoiding obstacles to meet an objective or a rhythm-based game in which you tap the screen at the right moment.