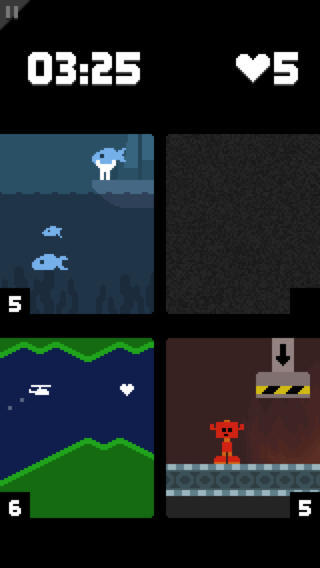 Hopefully you have at least four hands.
"Bored of playing one game? Have you tried playing FOUR GAMES AT THE SAME TIME??"
— Chris Burt-Brown, App Store page
Advertisement:

Essentially what would happen if you opened up four consoles with WarioWare on them and played them all at the same time.

Mini Mix Mayhem is a free app which focuses on your multitasking skills. You take control of four screens, each of which can display one of 36 quick minigames. These minigames are all as simple as memorizing a sequence of color or keeping a car on a road. The real challenge comes from trying to keep track of what's happening on each screen and completing each one while making as few mistakes as possible. Score is measured by how long you last until all ten of your lives run out.

The game includes a competitive two player mode with bombs and fifteen lives each, and an HD version exclusive party mode with twenty minigames at once and fifty lives.