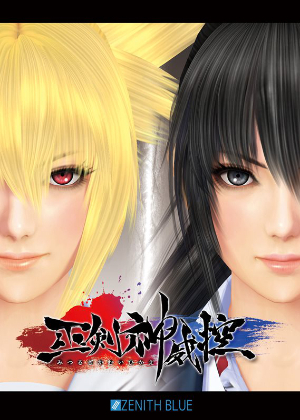 The story centers around Misa, a Japanese schoolgirl and Blade Templar who protects the world from demons and cursed artifacts. Misa is on a mission to hunt down and destroy a cursed weapon known as the Demon Blade, a demonic sword that steals the life-force of those that wield it. Unfortunately, the Demon Blade has fallen into the hands of her former classmate Suzuka, who has become possessed by its power. Reluctant to fight her friend, Misa sets out to destroy the Demon Blade while slaying hordes of (robotic) demons that stand in her way.

The game is a Stylish Action in the veins of Devil May Cry, in which Misa fight against several enemies in arena-based levels using melee attacks, lightning-fast katana slashes, and powerful Holy Techniques to create stylish combos. The game also incorporates light RPG Elements that allows players to improve Misa's abilities and unlock other techniques by using points gained from slain enemies.

Originally released on August 12, 2013, the game was later published by Active Gaming Media and released via Playism. An overseas released of the game was subsequently through Playism's English webpage, Desura, GOG.com, and Steam. Additionally, a version of Mitsurugi Kamui Hikae is out now for the PlayStation 4 and Nintendo Switch.