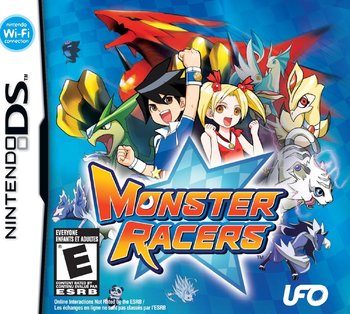 Anyone who's familiar with more than one Mons Series has probably noticed at least one primary thing about them: Overwhelmingly, they tend to be combat-oriented. Sure, there's the occasional Pet Interface among them, but even then, outside of the friendly virtual-pet interface, monsters like to fight each other. Someone at Koei must have looked at this, and thought, "Well, why do monsters have to do bodily harm to each other to be fun? How about monsters who engage in some healthy competition, like, say... racing?"

As you might've gleaned from the title, the 2010 Nintendo DS game Monster Racers is exactly that. A monster-raising game where, instead of fighting each other, monsters engage in friendly races with one another. The game combines the monster-catching and stat-building of the Mons genre with two-dimensional, Platformer-style races. Not only does it buck the turn-based RPG trend, it also does away with convention by being set in the real world (well, "real"). The presence of strange monsters is explained (sort of) by the fact that, a few years ago, a random, star-shaped island appeared in the Pacific Ocean, and shortly after it appeared, monsters that love racing each other started appearing on all the continents.

One thing that isn't unfamiliar, however: You play as a young boy or girl on a quest to become the world's greatest monster racer. That quest will take you not only to Star Island, but all around the world, from the Australian Outback to Mt. Fuji and beyond. On your quest, you'll take on the Star Seven—the greatest racers from each continent—and maybe a few villains as well. Good luck with that!

Not to be confused with Monster Rancher, which is a simulation series.