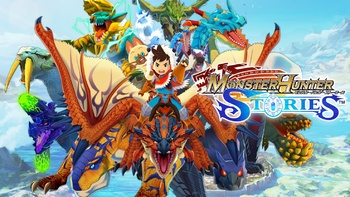 Ride on, my Monsties.
Advertisement:

Monster Hunter: Stories is a Spin-Off game of the popular Monster Hunter series developed by Capcom, made for the Nintendo 3DS and later ported to iOS and Android.

Unlike the main entries, Stories follows a story revolving about Riders; people who can ride and befriend the iconic monsters of the series in a turn-based Role-Playing Game format. Three childhood friends - Lute (the player character), Lilia, and Cheval - go out of Hakum Village and end up finding a monster egg that hatches into a Rathalos that quickly befriends Lute. Soon after, their village is attacked by a violent Nargacuga that ends up scarring the trio and destroying part of the village. One year later, Lute has come of age to become a full-fledged Rider. As they work hard to become a well-known Rider, they deal with the mysterious Black Blight; a strange phenomenon that drives monsters wild like it did with the Nargacuga from one year ago...

It received an Animated Adaptation in Monster Hunter: Stories - Ride On. A sequel, Monster Hunter Stories 2: Wings of Ruin, was released for Nintendo Switch and Steam.

The Ride On anime provides examples of: