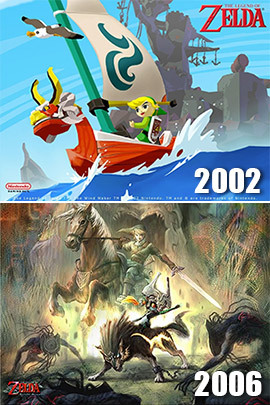 From cute and cartoony to grey and gritty.
Advertisement:

Whether it's because of some significant change in the series (like being released on a new console, or in an Alternate Universe), or just the designers wanting something different, occasionally the art style of a series may change for a sequel. Then, in some cases, the new art style may become the default art style.

This trope is for when the previously used art style in a series is switched in a sequel. This can invoke They Changed It, Now It Sucks!, if the change of style is unwelcome by fans of the original work. Note, that if a series continues to use one style for too long, some fans might complain that It's the Same, Now It Sucks!.

A Sister Trope of Art Shift, which is a temporary change of visual style within a work and Art Evolution, which is a gradual change but generally still within the same style. Compare Shifted to CGI and Video Game 3D Leap, when a franchise's visuals change from 2D to 3D.

Video game sequels and remakes being made for games on older console generations would most likely get an remaster to take advantage of the new hardware, although there are exceptions.