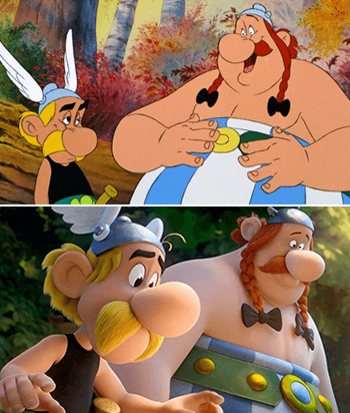 In the 2000s traditionally-animated works fell out of fashion due to blockbuster hits like the Pixar films and Shrek along with the simplicity of animating in CGI compared to traditional animation. While 2D style animation is popular in France and Japan (though many use CG elements occasionally, and CGI cartoons are also prominent) and amongst televised cartoons (though they're usually produced through digital animation programs like Adobe Flash or Toon Boom), All CGI Cartoons have been rising in popularity over the years, and Western-produced traditionally-animated theatrical films are rare. Thus many series that used to be done in traditional animation have changed to being CGI over the years.

Naturally, this is highly controversial amongst long-time fans and animation buffs. Many people will invariably complain whenever a franchise switches to CGI.

Compare to the Video Game 3D Leap for a video game counterpart where games went from mostly sprites to 3D models.