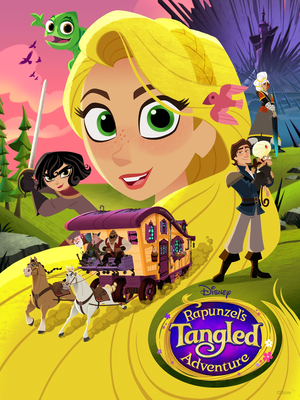 I got the wind in my hair and a fire within
'Cause there's something beginning
I got a mystery to solve and excitement to spare
The beautiful breeze blowing through
I'm ready to follow it who knows where
And I'll get there, I swear...
With the wind in my hair!
— Opening Theme
Advertisement:

Rapunzel's Tangled Adventure, known as Tangled: The Series for its first season, is an American animated series created for Disney Channel and executive produced by Shane Prigmore and Chris Sonnenburg. The series is based on the animated film of the same name, making it the first animated series based on a Disney movie in over a decade (following The Emperor's New School in 2006), and the first based on a Disney Princess-affiliated property since Aladdin: The Series in 1994.

Set between the events of the film and the short film Tangled Ever After, the show follows Rapunzel's efforts to learn about the world and reacquaint herself with her long-lost parents. However, during an outing before an important royal event, she ventures outside the castle walls and comes across a strange black tablet. When she touches it, not only does her hair transform back to its 70-feet long, blonde state (now indestructible), but strange stones start cropping up across the kingdom. Now alongside Eugene, Pascal, Maximus, the Pub Thugs, and her new handmaiden/confidante Cassandra, Rapunzel must adapt to life outside the tower while figuring out the mystery behind the black stones.

Season 2 shifted its focus to outside Corona as Rapunzel leaves her kingdom with Eugene and Cassandra in tow to follow the black rocks to a place called the Dark Kingdom, so she can unlock her one true destiny. In the third and final season, Rapunzel is back in Corona, and both she and Cassandra struggle to fulfill their destinies.

The series premiered on March 10, 2017 with a one-hour Pilot Movie entitled Tangled: Before Ever After. The final episode aired March 1, 2020.

Alternative Title(s): Tangled Before Ever After, Rapunzels Tangled Adventure