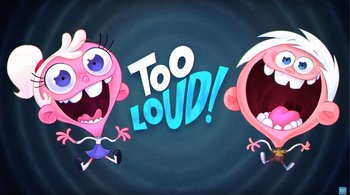 Too Loud! is an animated webtoon created by Nico Colaleo for DreamWorks's YouTube channel.

Two loud-mouthed kids named Jeffrey and Sara are the loudest and clumsiest library volunteers in the world. But you can't blame them - they were born with abnormally large heads! They will still do anything to make sure the library's visitors are satisfied, however.