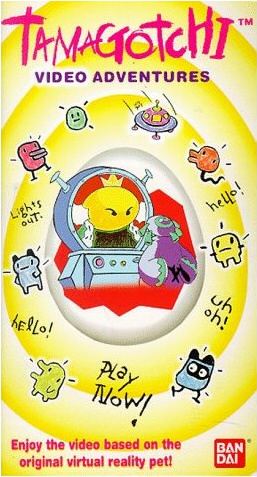 Tamagotchi Video Adventures is a 1997 Tamagotchi VHS by the American company 7th Level. It consists of three segments.

"Now Museum, Now You Don't" is a cartoon and the main feature. Cosmotchi notices that his museum lacks an exhibit from Earth. He sends the Tamagotchis to Earth to find an exhibit for his museum. The Tamagotchis get into groups, collect objects, and leave behind golden eggs. They partake in human activities, such as golfing and watching TV. When the Tamagotchis return to Tamagotchi Planet, they show Cosmotchi what they found. Masktchi, the only Tamagotchi who didn't have a group, shows Cosmotchi a popsicle stick that a kind human gave him to cheer him up. Cosmotchi uses Masktchi's popsicle stick for the museum because it shows the selflessness of humans.

"What's a Tamagotchi?" is a music video about the characters featured in the first segment. It's about 4 minutes long.

"How to Draw Tamagotchi" is a segment where Dan and his Hand Puppet friend Handy Warhol teach viewers how to draw Tamagotchi characters. Dan gives the viewers an easy step-by-step art lesson. Handy Warhol helps Dan and makes his own unique drawings.

Tamagotchi Video Adventures might be a Poorly Disguised Pilot. The cartoon has the title Tamagotchi Toons, suggesting they were planning to make more than one "toon", and it even has an Episode Title Card. Ultimately, it was just one rare VHS that was never popular.