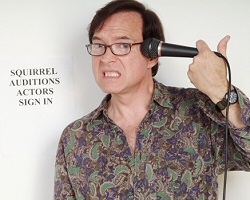 "Not sure if this is a generic voicemail message, or I mistakenly dialed Billy West"
— Futurama Promo
Advertisement:

William Richard Werstine (born April 16, 1952), known professionally as Billy West, is an American voice actor and comedian born in Detroit, Michigan. Put this guy in a room, give him a script and a mic and you can do a complete show with 20+ individual voices (some of which will sound like they're pitched up or down or autotuned on the track, but aren't).

In Futurama alone, he is slacker delivery boy Philip J. Fry, Mad Scientist Professor Hubert Farnsworth, smarmy space captain Zapp Brannigan,note A role originally written for Phil Hartman, but West stepped in after Hartman was murdered in 1998 Richard Nixon (who is now President of Earth and, like many celebrities from the past, is a head kept alive in a jar), and half of any background/supporting characters you see — oh, and Dr. Zoidberg, the loser lobster-esque alien doctor.

...and all of this after he first came to public attention as the voice of both Doug and Roger on Doug and both title characters of Ren & Stimpy after John Kricfalusi (the original voice of Ren) was firednote Ironically, Billy West auditioned for both Ren and Stimpy when the show was being created, but was given the Stimpy role after John K. decided to do Ren's voice himself. He's also stated that it was such an ordeal that he'll never work with John K. again.. He (along with the late Joe Alaskey) became one of few voice actors who can impersonate Mel Blanc in his prime, including characterizations of Bugs Bunny, Daffy Duck, Elmer Fudd and other characters from the Looney Tunes. He's also the Red M&M. Even before he was known for all these roles, West worked in radio, and was actually a cast member of The Howard Stern Show from 1989-1995.

Not to be confused with the guy from the video game The Adventures of Bayou Billy.

Notable roles of Billy West include

Billy West and his works provide examples of: