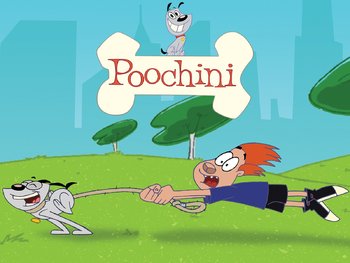 Poochini (or alternatively, Poochini's Yard) is a very obscure animated series created by Dave Thomas that aired on The WB 100+ Station Groupnote the equivalent to today's The CW Plus, running for a single season of 26 episodes. It is an American-German-Netherlands co-production, largely the work of WildBrain Entertainment (better known for helping to produce Yo Gabba Gabba! and Bubble Guppies). The series follows the life of a high-class dog named Poochini (voiced by Billy West) who is adopted by an average family after his original owner passes away. It originally aired globally in 2000, but did not debut in the United States until 2002, where it ran until 2003.