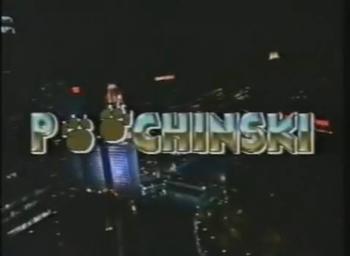 Poochinski is a Failed Pilot Episode that aired on NBC on July 9th, 1990. Directed by Will MacKenzie and written by Brian Levant, Lon Diamond and David Kirschner, the Buddy Cop Show stars Peter Boyle as seasoned Chicago police officer Stanley Poochinski who rescues and befriends a stray bulldog while also becoming the reluctant partner of rookie officer Robert McKay, played by George Newbern. During a heist gone bad, Officer Poochinski is fatally wounded by the criminals and seemingly dies with his adopted pet by his side. That is until he emerges alive and well, this time in the body of the bulldog. Now a talking dog, he and McKay team up once more to bring his killers to justice.

And things just get weirder from there...

Originally released as a double feature upon its debut alongside Turner & Hooch starring Tom Hanks, NBC ultimately chose not to greenlight the series and it has since become notorious for its unusual premise.