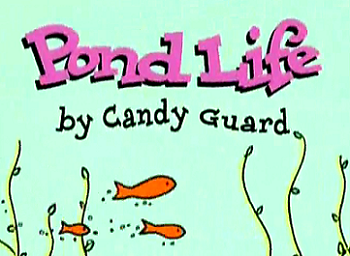 They don't actually live in a pond.
Pond Life was a British animated television series created by Candy Guard. It ran for two seasons in 1996 and 2000 on Channel 4, and, despite being a cartoon, its target audience was women.
Advertisement:

The series revolves around Dolly Pond (hence the title Pond Life) and the trouble she has living in an unnamed cul-de-sac, in a flat below her ex-boyfriend Nobby, with a job at the local shop due to never having gone to college. The worst part? She's in her 30s!

Not to be confused with that "Pond Life".