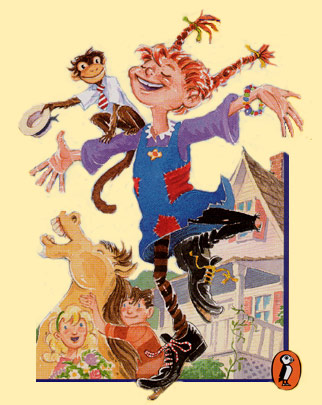 Pippi Longstocking (or Pippi Långstrump) began as a series of children's books by Swedish author Astrid Lindgren. They have since been adapted into multiple films and television series. The series is regarded as a classic of Swedish literature and the character has become a cultural icon.

The stories all revolve around the adventures of the eccentric young heroine Pippi. Her mother died when she was just a baby, so her sailor father, Captain Efraim Longstocking, raised her as he travelled the world on the seas. When he was blown overboard in a storm Pippi was convinced that her father had survived and would one day come looking for her, so she moved into an old house note  Captain Longstocking had previously purchased as a retirement cottage (called Villa Villekulla) in a little Swedish village to wait for him. Besides a pet monkey named Mr Nilsson and a horse named nothing at all, Pippi lives alone, takes care of herself and keeps a suitcase full of gold pieces to pay for anything she might need. She quickly befriends her neighbors Tommy and Annika, who are both very normal kids in a very normal family. Pippi herself is highly unconventional, assertive, and inhumanly strong, quite able to lift her horse one-handed without difficulty. She can also be instantly recognized by her distinctive red braids that stick straight out on either side of her head.

At first Pippi's adventures are confined to the town she lives in and include her rescuing other kids from trouble, clashing with adults who underestimate her, and generally doing whatever she pleases with no regard for social norms. She later travels with her friends to the tropical island where her father rules as king, having more exotic adventures there before returning home. By the end of the series pretty much everyone in the town comes to accept Pippi the way she is and nobody bothers to make her do anything she doesn't want to. This is okay because although she refuses to go to school or be put in an orphanage, and behaves very badly at times, Pippi is a good kid who really just wants to have fun.

The Pippi Longstocking books have been adapted for TV and cinema several times, the first being in 1949. The adaptation that is probably most widely known is the 1969 TV series (a Swedish-West German co-production) written by Lindgren herself and starring Inger Nilsson as the titular character, which was also re-edited into four feature films. There is also an American live-action film from 1988 (produced by Columbia Pictures and starring Tami Erin) and a Canadian-German-Swedish animated adaptation (co-produced by Nelvana and starring Melissa Altro) from 1997.