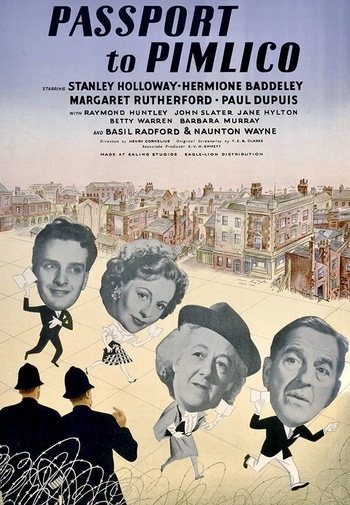 When an unexploded World War II bomb is accidentally set off in the working-class Pimlico district of central London, long-buried documents are uncovered proving that the area is legally part of the Duchy of Burgundy, and therefore foreign territory. While the locals are only too glad of the opportunity to declare their independence from the bureaucracy and austerity of post-war Britain, the UK government responds by setting up border controls and export restrictions in an attempt to starve the Burgundians into submission. Hilarity Ensues.

The film was a big influence on the 1959 Columbia Pictures comedy The Mouse That Roared.

Passport to Pimlico provides examples of: