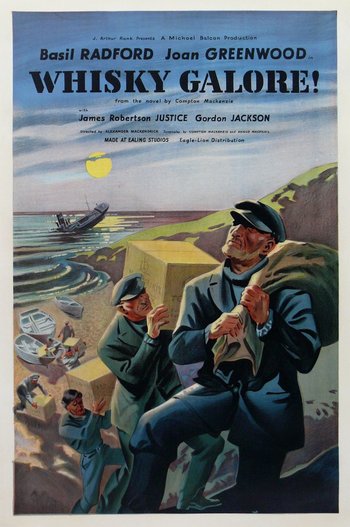 Whisky Galore! is a 1949 film directed by Alexander Mackendrick.

The setting is Todday, a fictional island in the Scottish Outer Hebrides, During the War. (The film was shot on the Outer Hebrides island of Barra). Life is grim in Todday, because there is no whiskey due to wartime rationing and shortages, and to the people of Todday, life is not worth living if there's no whiskey to drink.

There's romance going on, at least. Catriona Macroon has gotten engaged to meek schoolteacher George Campbell, although George's domineering mother refuses to sanction the marriage. Catriona's sister Peggy Macroon, the telephone operator (Joan Greenwood), has also gotten engaged to Sgt. Odd, an islander who has just gotten back on leave after fighting the Germans in North Africa. Still, the only person on the island who seems to be having a good time is Captain Waggett, commander of the local Home Guard militia, who takes his job of guarding a barren, windswept island far too seriously.

The tedium of wartime life in Todday is suddenly interrupted when a cargo ship, the SS Cabinet Minister, runs aground offshore. The cargo ship, it so happens, was carrying fifty thousand cases of whiskey. The citizens of Todday immediately mobilize to loot the whiskey before the ship sinks—but they have to overcome the opposition of Captain Waggett, who takes it upon himself to prevent looting at all costs.