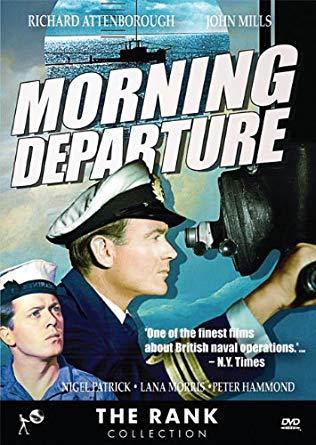 Morning Departure (released as Operation Disaster in the United States) is a 1950 British naval drama film about life aboard a sunken submarine, directed by Roy Ward Baker, and starring John Mills and Richard Attenborough. A young Michael Caine appears in his first feature film in an uncredited role as a teaboy.

The British submarine, HMS Trojan is out on a routine exercise to test its new snorkel mast. She encounters an unrecovered Second World War magnetic mine. When she dives the mine is set off, and blows off the bows of the submarine. The after section floods from the displaced snorkel mast, killing the 53 crew-members in the bow and stern sections. She settles to the bottom leaving twelve crew members alive amidships, saved by the watertight doors which have been closed by order of the captain when he realises the imminent danger.

When the shore base becomes aware that Trojan is overdue, surface rescue vessels are sent out to investigate. Following standard escape procedure, a diver is sent down with an air line while everyone prepares for the rescue. Armstrong selects the first four for release; they escape safely without incident, and are picked up on the surface. The eight remaining crew assume there are plenty of breathing sets for them all to escape successfully. However, the captain discovers that all but four have been destroyed in the blast. This means the final four will have to remain under water until a full salvage operation can be carried out, which may take a week or more.