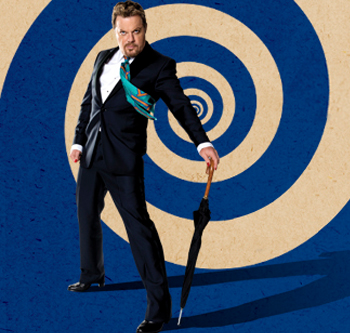 "Je suis un travesti executif... un travesti d'action!"
"So... uh... I'd better explain the tits. Um... didn't have those at school. Wanted to, but not in the school curriculum, even though I asked."
Advertisement:

So, uh... yeah. So! Eddie Izzard! Born Edward John Izzard on February 7, 1962 in Aden, Yemen, she's a British stand-up comedian and actor, notable for her style of rambling, free-associating monologues with pantomimic sketches, with Conversational Troping by the fistful should she veer onto the subjects of TV and cinema (which she will) and uses Wikipedia to do her research. She is known for being openly trans, as well her numerous, various roles in film and TV.

She's one of the few comedians who can perform in multiple languages: starting as bit parts about learning European languages (like Latin), she has gone on to do entire gigs in French and German. She's even done Labour Party gigs. As for her acting career, Izzard has appeared in several movies and theatre productions and has covered a wide range of both serious and eccentric roles (several of which are supervillains). As with most comedians, you can expect to spot her here and there — some of her most notable roles in the past decade cover master thief, Nazi defector, serial killer and... a talking car. And a talking mouse too.

around the UK to raise money for Sport Relief. She had never done any serious running until the month before. She ran six days a week for 51 days, covering at least 27 miles per day, carrying a flag for each county in which she rannote although she used a custom designed "peace" flag while in Northern Ireland to avoid causing offense to either side of the conflict, from London to Cardiff to Belfast to Edinburgh and back to London. She completed her 1,110 mile run on September 15, 2009 at Potters Bay and rescued a kitten along the way. Izzard was 47 years old at the time, and had completed her first marathon just three months before. In 2016, she ran 27 marathons in 27 days in South Africa, in tribute to Nelson Mandela (one marathon for each of his years in prison). More recently, Eddie has been aiming to finally perform her twenty-seven marathons across Africa for Sport Relief, doing so despite being fifty-four.

Izzard has spoken openly about being gender fluid and about going through periods of wanting to be in "girl mode" and "boy mode" and changing how she dresses to reflect these shiftsnote In the past, she's described herself as being "all boy plus half a girl" and a "male lesbian". She made headline news in 2020 when she said her preferred pronouns were "she" and "her". She later clarified that this isn't a definitive transition but that she's focusing on being in "girl mode" for the time being, also saying that people are free to use both forms of gendered pronouns, saying: "my brain is coded both ways"note for now, she is referred to in female pronouns in most media as evidenced here and on the other wiki. She also continues to take on male acting roles and even suggested people refer to her using male pronouns while she's playing such parts.

Additionally, she is a strong supporter of the Labour Party and says she intends to run for a seat in Parliament in the next general election (currently scheduled for 2024, barring snap elections) and that she'll continue running in every election until she wins.

Izzard is so highly thought of as a comedian and performer that Thy Lord the Comedy God Himself, John Cleese, described her as the "Lost Python" (Izzard hosted a documentary and appeared with the remaining members of the troupe on BBC Two for their 30th anniversary). Eddie's most recent show Force Majeure was successful enough to continue across five continents - despite starting in 2013, and having the show released on home video while still touring, she still continued to sell out venues, playing dates in the USA up until July of the following year.