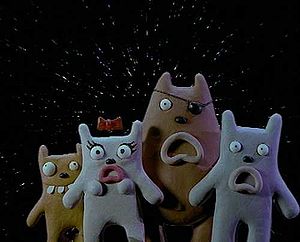 A very bizarre stopmotion animated series from Aardman Animations (the makers of Wallace & Gromit) chronicling the day-to-day lives of four plasticine dogs: the titular straight man Rex, trigger happy slob Bad Bob, sarcastic Token Female Wendy, and erm... Vince, a somewhat batty dog who suffers from spontaneous bouts of Random Pavarotti Disease and has a strange fixation for Tuesdays, jam and hoovers. Much of the gang's shenanigans often dealt with them seeking ways to achieve fame & fortune (due to constantly being broke), going on adventures in order to please "the bloke who runs telly"... or simply just screwing with the audience's heads.

The show ran for two series shown between 1998 and 2001 on BBC Two, but had a shaky timeslot because of its often irreverent nature, as well as much Executive Meddling and a slight shift in voice cast. It has, however, found a much wider audience on the Web since Atom Films showcased the series (as well as other Aardman shorts such as Pib and Pog and Angry Kid), and is overall a great start for those willing to check out the studio's more offbeat productions.

Rex the Runt features examples of:

Example of:
Creating Life Is Unforeseen