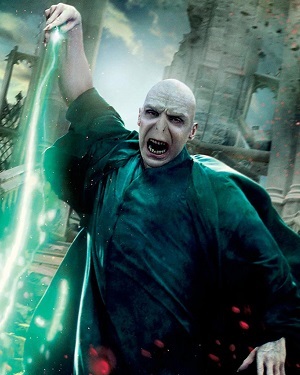 "I fashioned myself a new name, a name I knew wizards everywhere would one day fear to speak, when I had become the greatest sorcerer in the world!"
Click here for him during his time at Hogwarts 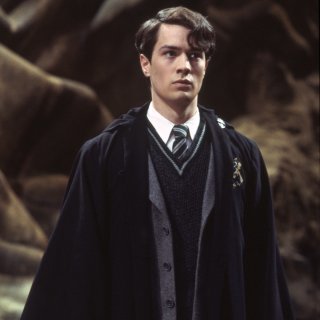 "There is no good or evil. There is only power... and those too weak to seek it!"

The Big Bad of the Harry Potter series.

As Hagrid once put it, not all wizards are good; some of them go bad. And Lord Voldemort — previously known as Tom Marvolo Riddle — is about as bad as a wizard can go (and far beyond that). Riddle was once a student of Hogwarts, and seemingly one of the best and brightest that the school had ever produced. However, he was also borderline sociopathic, disgusted by his half-muggle heritage, and there were severe gaps in his knowledge — namely, he knew nothing about love. Riddle would often commit a crime, create a patsy, and let the patsy take the fall for him. It was only through the work of Albus Dumbledore that Riddle's crimes were exposed.

Eleven years after he was seemingly annihilated, the man was still referred to only as 'He-Who-Must-Not-Be-Named' or just 'You-Know-Who.' Yet his original name had faded into obscurity. Voldemort had become The Dreaded among the wizards of Western Europe. He assembled the Death Eaters to bring about his will in a reign of terror. The Ministry of Magic seemed powerless before him: but before he could seize absolute power, he mysteriously vanished in an attempt to murder one-year-old Harry Potter in his crib.

Voldemort did not die: precautions he had taken using the Dark Arts left him alive, but without a body and almost powerless. For the first four books, Voldemort is forced to employ various cat's paws and agents in a campaign to restore himself to life, and ideally to kill Albus Dumbledore... and, increasingly, Harry Potter. At the climax of the fourth book, Voldemort is restored to his full strength, and the remainder of the series is devoted to his insane ambitions and an increasingly personal vendetta with Harry.

He acts as an inspiration for the Augurey, and haunts Harry's dreams nineteen years after the events of the series.

During his first meeting with Harry Potter, Voldemort makes a bargain with Harry: In exchange for the Philosopher's Stone, Harry will get to see his mother and father again.

During his first meeting with Harry Potter, Voldemort makes a bargain with Harry: In exchange for the Philosopher's Stone, Harry will get to see his mother and father again.