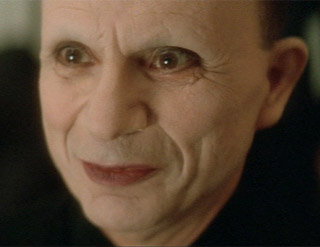 "Charisma oozes out of people without eyebrows, you know! Hot damn! I don't have eyebrows either!"
— Second Mizukage, Naruto
Advertisement:

A Sub-Trope of Unusual Eyebrows, this is when a character has no eyebrows.

Typically, this is used to give the individual a more brutish, Neanderthal look (although, ironically, Neanderthals are stereotyped to be hairy). Alternatively, they deliberately throw the character into the Uncanny Valley, which can create an ethereal or alien appearance. In these cases, the brow ridges will tend to be fairly prominent and well-defined, so that the character can still make appropriate facial expressions. Occasionally, however, the artist simply doesn't draw them with eyebrows, and they have to find other ways to emote.