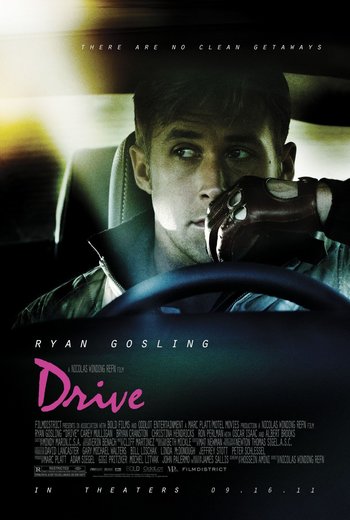 There are no clean getaways.
"If I drive for you, you give me a time and a place. I give you a five-minute window. Anything happens in that five minutes, and I'm yours, no matter what. I don't sit in while you're running it down; I don't carry a gun... I drive."
— The Driver
Advertisement:

Drive is a 2011 neo-noir crime thriller directed by Nicolas Winding Refn, based on the 2005 novel of the same name by James Sallis. The film is also inspired by the 1978 movie The Driver, right down to the premise and characters.

Ryan Gosling plays The Driver, a stuntman/mechanic in Los Angeles who moonlights as a Getaway Driver for robberies. The Driver has isolated and detached himself from just about everyone else in the world except his boss Shannon (Bryan Cranston) and his young neighbor Irene (Carey Mulligan), whom he becomes emotionally attached to. After the Driver becomes entangled in a botched heist involving money stolen from The Mafia, he finds his life coming apart and must fight to stay alive and protect the people he's come to care for.

Integral aspects of Drive's atmosphere include its slow pace, minimalist characterization, brutal violence, and especially its synth-driven music, with an ambient score from Cliff Martinez and a soundtrack populated by artists within the then-nascent '80s-throwback synthwave genre. While Drive wasn't the only film of its time to incorporate the genre (some point to TRON: Legacy, which came out a year prior), it's without a doubt the most famous one. Kavinsky's "Nightcall" and College's "A Real Hero", both used for key moments in the film, essentially catapulted synthwave into the mainstream and are still some of the genre's most recognizable songs. Refn would later repeat this stylistic choice for The Neon Demon, with Martinez returning for the score.

A sequel to the novel, titled Driven, was published in April 2012. A comic of the same name was published by IDW, chronicling on what happened to the Driver after the events of the movie.

Don't confuse this film with the 1997 Marc Dacascos film of the same name.

Gosling has said in interviews regarding the movie that he'd like to do a sequel someday.

The following tropes belong to Drive, no matter what: