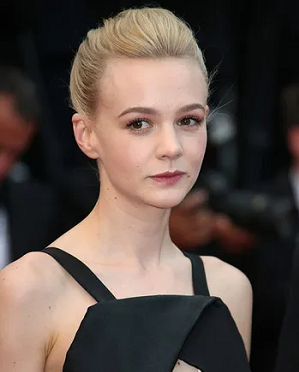 Carey Hannah Mulligan is an English actress born on 28 May 1985 in London, England. She had a few bit roles in films and TV shows, but her first big break came in 2007. She starred in the fan-favorite and critically-loved Doctor Who episode "Blink" as Sally Sparrow and won a Constellation Award for it.
Advertisement:

In 2009 she starred in the film An Education opposite Peter Sarsgaard. The film proved a huge career step for her, as many critics noted the depth and sincerity she brought to the role. She won numerous awards for the role including a BAFTA and was nominated for an Oscar as Best Actress. Since then she has become one of Hollywood's most sought after actresses. She tends to play sweet, intelligent women. Her filmography displays a penchant for period pieces, but she has also taken on modern roles with an edge, such as in Drive (2011) and Promising Young Woman. She is considered to be one of, if not, the best actress of her generation.

She also married Marcus Mumford of indie folk act Mumford & Sons. They have a son and a daughter together.

Tropes in her career: