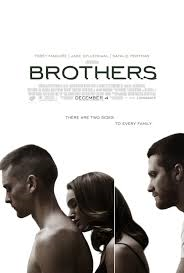 Brothers is a 2009 psychological war thriller directed by Jim Sheridan. It is a remake of Susanne Bier's Danish film Brødre from 2004.

Tobey Maguire received a Golden Globe nomination for Best Actor in a Motion Picture Drama for his performance.

Not to be confused with the 1984 sitcom of the same name, nor with the sequel to Marathon Man.