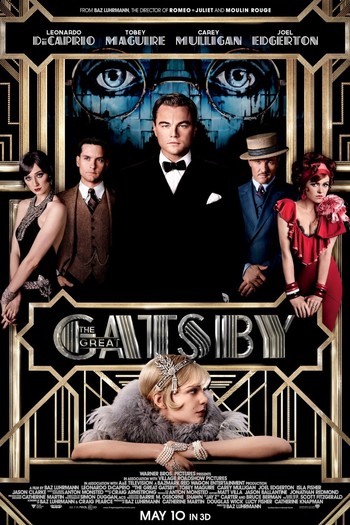 "I knew it was a great mistake for a man like me to fall in love."
—Jay Gatsby
Advertisement:

In The Roaring '20s, writer and wall street trader Nick Carraway (Maguire) finds himself drawn to the past and lifestyle of his millionaire neighbor, Jay Gatsby (DiCaprio). Gatsby, meanwhile, can't let go of his past love for Daisy (Mulligan), who's now married to another man, Tom Buchanan (Edgerton).

By far and away the most extravagant and visually dazzling adaptation of the novel to date (to the point of being released in 3-D), as well as the most faithful (to the point of quoting the book verbatim at numerous points), the film notably keeps the 1922 setting of the novel but combines and contrasts authentic Jazz age tunes with strikingly modern music and visuals.

Tropes specific to the movie include:

Example of:
Ripping Off the String of Pearls