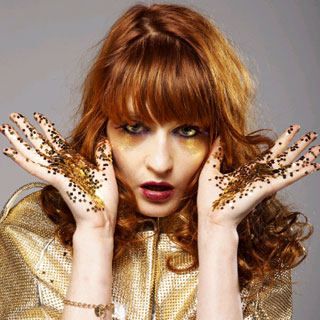 Florence - the machine
I am done with my graceless heart ...
Advertisement:

Florence + the Machine is the work of British singer/songwriter Florence Leontine Mary Welch (born 28 August 1986), with 'the machine' being her backing group (once a rotating cast, but it has had the same lineup for nearly a decade).

The name originally referred to her original collaborator (and current keyboardist for her backing group) Isabella Summers when the group was "Florence Robot/Isa Machine" to be shortened to its current moniker. After her debut album Lungs made number one in the United Kingdom (six months after release, and repeatedly), she became one of 2009's frontrunners in a burst of popular, powerful female pop music. Her second album, Ceremonials, switched tacks abruptly and took the world by storm in a burst of overpowering soul music.

Welch is known for quite macabre lyrics — "Rabbit Heart (Raise It Up)" was her reaction to being asked to make an upbeat record for marketability! —, love-or-hate performances and haunting vocals.

Florence contributed her vocals to "Sweet Nothing" by Calvin Harris, and he remixed "Spectrum" for radio. Both charted #1 in the UK. She has a cover of Elton John's "Tiny Dancer", released on the tribute album Revamp: Reimagining the Songs of Elton John & Bernie Taupin. She also acted (or, perhaps, appeared would be a better word) in the filmed livestream of The Third Day: "Autumn".

Aside from Welch, the other permanent official members of Florence + The Machine are: Isabella Summers (keyboards), Robert Ackroyd (guitar), and Tom Monger (harp, xylophone, percussion). Longtime members Chris Hayden (drums) and Mark Saunders (bass) both left the band in 2018.

Their music is frequently used in pop culture releases. They contributed the song "Heavy In Your Arms" to the Twilight Saga: Eclipse soundtrack, and performed a song for

Snow White & the Huntsman. One of their songs were also used in Revenge's finale, to great acclaim, and in a season finale of Warehouse 13. "Seven Devils" was used to great effect in the Game of Thrones season 2 trailer, and she later rendered the in-universe song "Jenny of Oldstones" for season 8. The song "Over The Love" was made for The Great Gatsby (2013) movie soundtrack, which appears to be a song from Daisy's perspective. Meanwhile, her cover version of Ben E. King's "Stand By Me" is used in the video game Final Fantasy XV, and she contributed two other songs in an EP titled Songs from Final Fantasy XV, as well as a remix of "I'm Not Calling You A Liar" for Dragon Age II. The song "Wish You Were Here" was also made for the soundtrack of Miss Peregrine's Home for Peculiar Children, and "Call Me Cruella" was their contribution to the Cruella OST.

Florence + the Machine provide examples of the following tropes:

So tonight I'm gonna cut it out and then restart ...

Alternative Title(s): Florence Plus The Machine