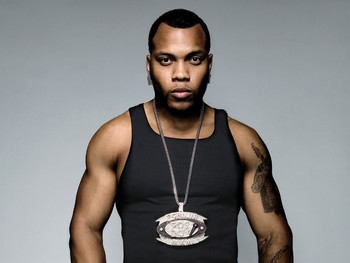 Flo Rida, real name Tramar Lacel Dillard (born September 16, 1979), is a rapper and songwriter from Miami, Florida. He emerged in 2008 with the club anthem mega hit "Low" and has been consistently putting out Pop Rap radio hits ever since. One of the most egregious examples of a "singles artist", he has 11 Top 10 hits, and 7 songs in the Billboard end of the year Top 20, several of which have been certified gold or platinum. Meanwhile, his album sales have tended to be rather poor in comparison (none of them have been gold certified in the United States). Described by Stephen Colbert as "the last black man willing to be associated with the state of Florida".
Advertisement:

In 2021 it was —quite unexpectedly— announced that Flo Rida would be representing San Marino in the Eurovision Song Contest with Italian singer Senhit on her 2021 entry "Adrenalina"note While they did make it out ofthe semi-finals, they only came 22nd out of 26 acts in the final.

Tropes associated with Flo Rida include: