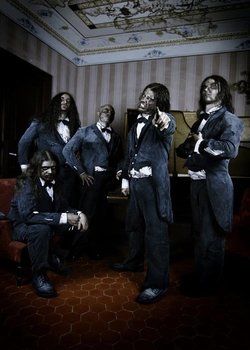 Bring out the mariachi band!note That's not mariachi!
Advertisement:

Fleshgod Apocalypse is an Italian Death Metal band formed by Hour of Penance frontman Francisco Paoli; they were formed in April 2007 and recorded their first demo, Promo '07, at 16th Cellar Studio with producer Stefano "Saul" Morabito, releasing it shortly after.

In May 2008, the band recorded its first full-length album, Oracles. In December of that year the band decided to part ways with Neurotic Records and signed with Willowtip Records, who released Oracles in 2009. Shortly after the release of Oracles in 2009, the band had a lineup change, with a new member, Tommaso Riccardi taking over vocals and rhythm guitar, which were previously handled by Francesco Paoli, as Paoli took over the drums at this time.

In 2010, the Mafia EP was recorded, again at 16th Cellar Studios, and was released via Willowtip Records. It includes four new tracks and a cover of the track "Blinded by Fear" by At the Gates. The band embarked on another European tour shortly after the end of the Mafia recording sessions, supporting Suffocation. Following this tour was a headlining tour of Russia.

The band released their second album, Agony, on August 9, 2011 in North America and August 19, 2011 in Europe.Fleshgod Apocalypse took part in the 2011 Summer Slaughter Tour in North America, alongside co-headliners Whitechapel and The Black Dahlia Murder. The band toured the US with Decapitated in late 2011. In January 2012, they toured the UK with The Black Dahlia Murder and Skeletonwitch. During March 2012, Fleshgod Apocalypse toured South Africa, supported by local death metal acts.

Labyrinth, their third album, was released in August 2013, during which time they toured with Arsis and Wintersun. In 2014, they toured internationally with Septicflesh and Insomnium. 2016 marks the release of King, their fourth full-length, which will be ushered in with a US tour with Carach Angren and Abigail Williams.

In 2019, the group released Veleno, their fifth full-length album.