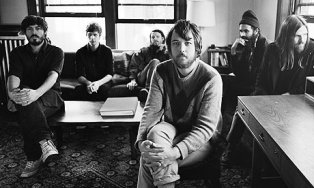 Fleet Foxes are a Seattle-based indie-folk/Baroque Pop sextet, originally built up around school friends Robin Pecknold and Skyler Skjelset. After releasing a self-titled debut EP in 2006, they rose to fame and much critical acclaim in 2008 with the EP Sun Giant and a full-length album (also self-titled). A new studio album called Helplessness Blues was released in 2011.

Their music features lots of complex instrumentation and vocal harmony, inviting many comparisons to The Beach Boys and Crosby, Stills, Nash and Young, along with other acts from the Sixties and Seventies. The general atmosphere often evokes a somewhat Autumnal feel, similar to the likes of Nick Drake. Ultimately, however, the Fleet Foxes stand out it the music world as a very original act. The band's skilled musicianship and Pecknold's talent for songwriting have also attracted much praise by music fans and press alike.

The second album differs from the first in several ways. The instrumentation features violins and flutes (courtesy of multi-instrumentalist Morgan Henderson) and fewer electric instruments. The songs are much more subject-based in their lyrics rather than being purely poetic. Many of them were inspired by the difficulties experienced in coming to terms with new-found success and creating the new record, as well as general reflections on ageing and finding one's place in the world.

After the second album and an exhausting tour, Pecknold made a quiet announcement in 2013 saying that the Foxes were on an indefinite hiatus. Pecknold started questioning if music was really his passion, wanting to maybe aim for a different career path. Then, in 2016 it was hinted that the Foxes were working on a new album and were back together. It was finally confirmed on Christmas day, and was released as Crack-Up in June 2017. Their fourth studio album, Shore, was released on September 22, 2020.

Their music videos provide examples of