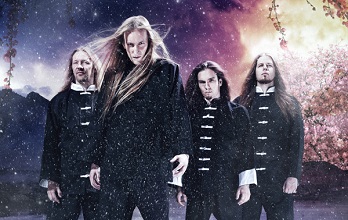 From left to right: Kai Hahto, Jari Mäenpää, Teemu Mäntysaari, Jukka Koskinen
Night is falling over my home
The land of snow and sorrow, oh carry me away from the cold
And I fall asleep and I will not be afraid
All I was, is gone now and sorrow is all I feel
- "Land of Snow and Sorrow", from Time I
Advertisement:

Originally a side project, Jari had started writing songs for Wintersun in 1995, and drafted the first album along with his band duties in Ensiferum. However, due to the clashing schedules for recording the debut album and already booked Ensiferum tour he was forced to quit the band and focus solely on Wintersun.

The debut album was finally released in 2004, with Jari performing all the guitars, bass, keyboards and vocal duties and drums played by Kai Hahto. It was a critically acclaimed success, regarded as a modern classic in Finnish heavy metal scene, and Jari formed a actual band to go touring. Everything seemed optimistic and joyful...

...Until 2006 came, and Jari started working on the next album. Titled Time, it was planned to up the production and composition of the debut, but it also proved to be a real pain to work out and ended up in the Development Hell. Jari planned to create full orchestral backgrounds out of sound samples, but due to the complexity of the composing process, inexperience in working with the samples, writer's blocks and the computers crashing unable to run the strenuous programs the release date had to be pushed further and further. Some of the new songs were played live in 2011 as a assurance of the work, but the wait started to feel unbearable.

The wait was finally rewarded in 2012, when Time was announced to be released - in two parts. Time I finally saw daylight in October 2012. Time II is currently being mixed, but the renewing problems in the production - mostly lack of funding and proper studio resources - have put it back to the development hell.

However, in early 2017 it was announced that the band has recorded and produced an all-new all-different album in the middle of the Time II problems to be released as the third full-length Wintersun album, The Forest Seasons. It was released on July 21.

Both drummer Kai Hahto and bassist Jukka Koskinen have also worked with Nightwish, having filled in for the roles of departed Nightwish members Jukka Nevalainen and Marko Hietala, respectively. While Koskinen remains a temporary member as of 2022, Hahto was made their permanent drummer in 2019.