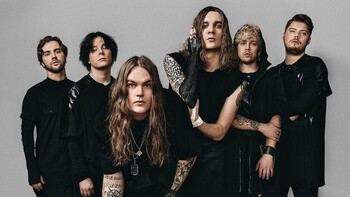 Living that life on the dark side.note From left to right: Olli, Aleksi, Niko, Joel, Joonas, and Tommi.
Advertisement:

Blind Channel is a rock band based in Oulu, Finland.

Consisting of vocalists Joel Hokka and Niko Moilanen, guitarist Joonas Porko, bassist Olli Matela, drummer Tommi Lalli, and Aleksi Kaunisvesi on samples/percussion, the band was founded in 2013 and achieved international success as the Finnish entry for the 2021 Eurovision Song Contest with their song "Dark Side", winning fourth place in the public vote and sixth place overall, Finland's second best result since Lordi in 2006.

Self-described as "violent pop", their genre ranges from alternative rock and post-hardcore to Nu Metal, containing electronic and rap elements along with the usual instruments and melodies of rock. They are also known for their frequently dark lyrics and doing rock covers of famous pop songs.

Oh, and they've also been dubbed "the Finnish Spinal Tap" for their ongoing series of tour mishaps, usually involving losing an instrument, a bandmate, or themselves.