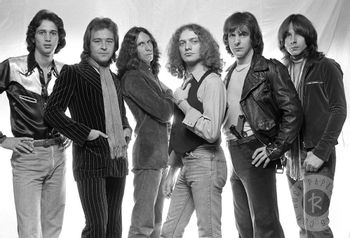 A British-American rock band originating in The '70s and The '80s, Foreigner was one of several Hard Rock bands (along with with groups like Journey and Survivor (Band)) that gained fame in the AOR scene during the early 1980s. The group's mainstays were English guitarist Mick Jones (not that one) and American lead vocalist Lou Gramm, with a rotating cast of other musicians. Since Gramm left in 2003, Jones is the only founding member still with the group.

The group had its greatest success with a string of seven multi-platinum albums between 1977 and 1987, and had hit singles with songs including "Cold as Ice", "Juke Box Hero" and the ballads "I Want to Know What Love Is" and "Waiting for a Girl Like You". While members have come and gone, the band continues to tour today, often sharing the stage with fellow AOR stars such as Journey, Styx and Chicago.