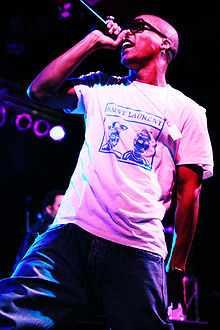 "O ye tormented souls! My goal is to sit on the globe, like North Poles!"
— "Super" Lupe Fiasco, "SLR"
Advertisement:

When he burst onto the scene in the mid-2000s, Lupe Fiasco (real name Wasalu Muhammad Jaco, born February 16, 1982) was called a breath of fresh air into what had been becoming an overly commercialized genre. By Jay-Z, no less. His first early success came when he appeared on Kanye West's "Touch the Sky". Not long after that, his debut album Food & Liquor dropped and the lead single "Kick, Push", a homage to skateboarding among other things, started to reveal the talent the young rapper had. The album was critically acclaimed and got him three Grammy nods.

A year later, his sophomore effort The Cool told the story of three different characters: The Cool (aka Micheal Young History), The Streets (the female personification of addiction to the high life), and The Game, a manifestation of the perils of urban living. There are numerous references scattered throughout both albums.

His third album, Lasers, was shelved in 2008 by his label because they thought it wasn't "pop" enough. A combination of Lupe caving to pressure and rewriting some songs (something he has said will forever taint his own opinion of the album) and general fan outrage led to the record finally being released in 2011.

Atlantic has promised to keep their hands off of The Great American Rap Album, and Lupe himself said it would appeal to some of his oldest fans. He also has an impressive arsenal of mixtapes that have become popular in their own right, notably the Fahrenheit 1/15 trilogy, and more recently Enemy of the State. Friend of the People, previously cancelled, was released on Thanksgiving 2011, like it was supposed to the previous year, before he cancelled it due to people leaking his songs.

Funnily enough, the genre that his Friend of the People mixtape is classified under is "Unclassifiable".

Food and Liquor II was released in 2012. While the album was generally well liked and earned him (yet another) Grammy Nomination, a lot of criticism came in the form of accusing Lupe Fiasco being a bit too Anvilicious and one critic accused his self-regard being greater than his actual skill. Fans, on the other hand, loved it.

In December 2016, he announced that he was "retiring" from rapping after releasing a single known as "N.E.R.D." and then cancelled three planned albums for 2017 under the name DROGAS, DROGAS Light, and Skulls. He later on surprised people by releasing DROGAS Light, and the future of the other albums remain up in the air.

In 2018, he released DROGAS WAVE, which has seen massive praise from fans, calling it one of his best.