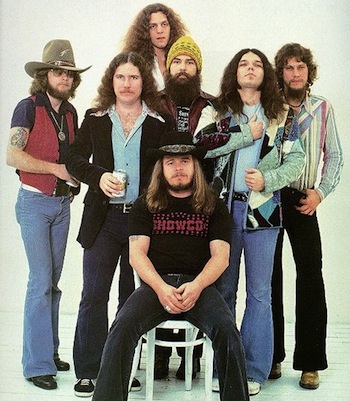 If you live in the American South, you damn well better know Lynyrd Skynyrd.

Jacksonville friends Ronnie Van Zant, Allen Collins, Larry Junstrom, Gary Rossington, and Bob Burns formed the band in 1964 under the name "The Noble Five". They later renamed themselves "My Backyard" in 1965, "Leonard Skinner" (a rather authoritarian teacher at their former high school who disapproved of male students with long hair) in 1970, and "Lynyrd Skynyrd" in 1972. During their early years, Junstrom left the group and Greg T. Walker replaced him, while Rickey Medlocke joined the band as a second drummer and mandolinist. In 1972, Walker and Medlocke left the group to perform with the band Blackfoot and Leon Wilkeson took Walker's place as the bassist. Meanwhile, roadie Billy Powell joined the group as the keyboardist. The group was eventually discovered by producer Al Kooper and recorded its first album, (pronounced 'lĕh-'nérd 'skin-'nérd), in 1973 — in the process, the album forever cemented the song "Free Bird" as a permanent part of the rock'n'roll lexicon. (The next time you hear someone shout "Play 'Free Bird'!" at a concert, you now know who to blame).

Tragedy struck on October 20, 1977, three days after the band recorded their Street Survivors album, when their chartered plane crashed in Mississippi. Ronnie Van Zant, guitarist Steve Gaines, his sister Cassie (one of the band's backup singers, known as The Honkettes), and Dean Kilpatrick, a member of the band's production staff, were killed. The band disbanded after the tragedy, with the group reuniting at Charlie Daniels's Volunteer Jam V to perform an instrumental version of "Free Bird" accompanied by Daniels and some of his band members (bassist Charlie Hayward and keyboardist Joel "Taz" DiGregorio). Rossington, Collins, Wilkeson and Powell formed the Rossington-Collins Band, but Collins was prone to alcoholism and drugs. The band reformed in 1987 with Ronnie's younger brother Johnny and a rotating cast of new blood.

Allen Collins died in 1990 of pneumonia resulting from a serious car accident four years earlier due to his drug abuse. In 2015, Bob Burns was killed in a car accident at his Georgia home. Larry Junstrom went on to spend more than 35 years as the bassist for 38 Special (led by Ronnie's other brother Donnie - yes, the brothers' names are Ronnie, Johnny and Donnie), retiring in 2014 and passing in 2019. Rossington is the only founding member still performing with the band.

Although the group never topped charts (their biggest hit, "Sweet Home Alabama", topped out at #8 on Billboard), Skynyrd remains beloved by tons of rock fans, especially in the South, where fans embraced the band as a counter to the "protest bands" that popped up in the '60s. ("Sweet Home Alabama" even took a few direct shots at Neil Young for some of his protest songs, despite the off-stage friendship between Young and Van Zant.)

"If I trope here tomorrow, will you still remember me?":