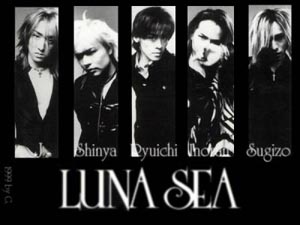 Luna Sea is one of the bands that made Visual Kei popular in Japan. Originally called Lunacy, the band was founded in 1986 by schoolmates Inoran (guitar) and J (bass). In 1989, Ryuichi joined as vocalist, bringing Sugizo as a lead guitarist and occasional violinist, and Shinya joined as their drummer. They have stayed in this lineup ever since.

Shortly before they released their first album, they changed their name to Luna Sea, justifying a lot of pv's and stage decorations featuring either sea and water or moon later on. Their tendency to release important information on a full moon day and name their concerts after moon phases might also have something to do with that. In 1992, they were discovered by hide of X Japan and signed to Yoshiki's label Extasy Records (which they left at the end of that year to sign with a major label). They were very successful in the 90's, though they abandoned their wilder hairstyles and looks for a tamer version (aka the boyband look) pretty soon.

Focusing mostly on rock, the band has accomplished a variety of sounds over their careers, each showcasing the progressive songwriting talents of the band members. Their early career is characterized by a very 80's sound, mixing elements of grunge, metal, punk, and a hint of neo-classical into their playing. The band is known among fans for having a "mysterious" sound.

In 2000, they announced an indefinite hiatus, as each of the members pursued their own solo careers, several of them finding great success. In August 2010, this hiatus was ended, and the band announced that they were both going on tour again and writing new songs.