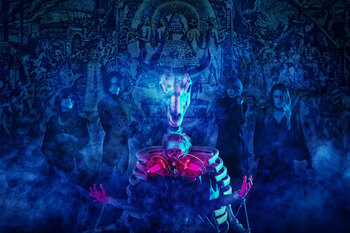 Dir en grey (DIR EN GREY/Dir en grey) is a Japanese five-piece Avant-Garde Metal band. They formed in 1997 as a Visual Kei band, but have gone in a more contemporary, post-Visual Kei direction as far as appearance. Musically, Dir en grey encompasses Hard Rock, Heavy Metal, Nu Metal, Gothic Metal, etc. They first gained attention in 1997 with two independently produced singles. Subsequently, they caught the eye of Yoshiki from X Japan, who helped arrange and produce the singles of Dir en grey's first studio album, and subsequently signed them to Extasy Records. Later on, they would switch labels to Dynamite Tommy's Free Will Records, and then sign to both Gan-Shin for their European releases and The End Records for their American releases. Their material is released by Firewall Div, a sub-division of Free-Will Records, Since their inception, the quintet has released eleven full-length studio albums, three EPs, and loads of other material, including singles, live videos, and music video compilations.

Considered by some metal fans as the Spiritual Successor to the legendary bands Faith No More, Mr. Bungle, and X Japan, and even dubbed as "the Japanese Marilyn Manson", the band has gained international acclaim for their unique sound, precise, dynamic musicianship, dark, explicit lyrical themes, near-incomprehensible songwriting and convention-challenging image, and enjoys continuous success as one of Japan's biggest Visual Kei groups. They were part of the Second wave of Visual Kei bands and were one of the bands responsible for re-establishing Visual Kei as a musical movement among Heavy Metal artists.

Wikipedia has a complete and comprehensive list of all their material