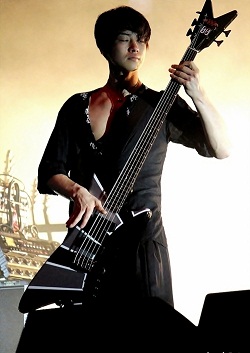 Toshimara Hara (born March 31, 1977), who goes by his stage name Toshiya, is a Japanese Heavy Metal bass guitarist and songwriter, best known for his work as bass guitarst for the experimental metal band Dir en grey. Before joining the band in 1997, he was already an active musician who played for the Visual Kei bands D+L and GO:SICK. In addition to being a musician, he is also an illustrator and fashion designer.