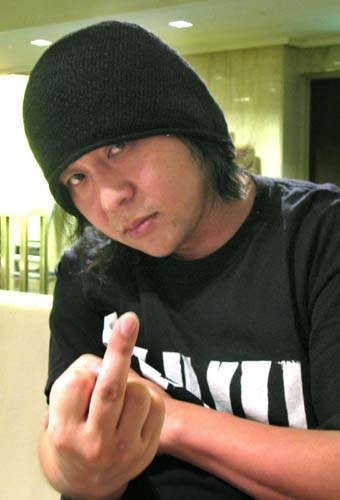 Attitude and visual rock.
Related acts with which Dynamite Tommy has performed:
Acts currently signed to Free Will Records or an affiliate label by Dynamite Tommy as a solo producer:
"I don't think our breed of Visual Kei exists anymore..."
Advertisement:
— Dynamite Tommy, commenting on the modern Visual Kei scene.

Hiroshi "Dynamite Tommy" Tomioka (born 14 September 1964) is an ex-singer and currently the most prolific label owner and producer in Japanese Visual Kei. Debuting in 1986 as the vocalist for Visual Punk Rock band COLOR, he became known at first for his then Improbable Hairstyle (the entire band, true to their name, went with incredibly over the top hair color and style), for his very much polarizing vocal style, and for a nigh-legendary feud with Yoshiki Hayashi that led to the total demolition of a bar during one of their fights and that lasted in some form for around 30 years until the two of them finally seemingly became friends (or at least capable of their and their bandmates' working with each other) as of 2015.

While performing with COLOR, he realized he had a talent for A&R and production, and formed Free Will Records. He has maintained a steadier focus on music and music-related activities throughout his career, seeming to prefer the role of producer and finder of talent, though he has been involved in a steady stream of bands, the latest band of his own being The Killing Red Addiction - that was, until he announced the reunion of Sisters No Future, with himself as the vocalist.

Currently, he is the most active figure in the business and A&R side of Japanese Visual Kei, with Free Will Records being the most active label. He is also somewhat outspoken on the issue of music as a part of society in Japan, but currently tends to keep a lower profile internationally.