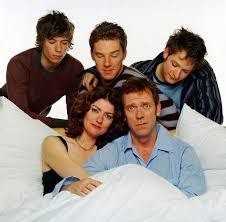 This... is Paul Slippery.
He is 44 years old.
His life is about to fall apart.
—Opening narration, Episode One
Advertisement:

Fortysomething is a Britcom starring Hugh Laurie as Paul Slippery, a London general practitioner who begins to suspect that he's hearing other people's thoughts — most notably those of his wife, Estelle. But when you consider that Estelle has started working for an ambiguously flirtatious power lesbian, Paul's eldest son (Benedict Cumberbatch) is bent on revenge against his middle son for stealing his girlfriend (whilst involved with her sister!), Paul's youngest son is using the family home as a base for various entrepreneurial activities, his colleague (Peter Capaldi) is completely bonkers, and he can't even make an intimate dinner for his wife without his entire family asking for a taste of "Proud Banana"... well, it's not completely unreasonable that Paul would go a little mad.

Not to be confused with the late '80s/early '90s ABC show thirtysomething.