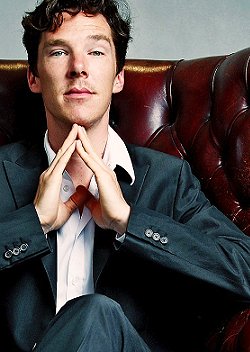 Messy Hair Steeplehands
"Benedict is this sort of beautiful, exotic creature. He's never going to play an ordinary man, 'cause he couldn't. That's not what he's like, but he will tell the stories of great men."
— Steven Moffat
Advertisement:

The son of actors Timothy Carlton Congdon Cumberbatch and Wanda Ventham, he skyrocketed into international stardom with his BAFTA, Golden Globe nominated and Emmy winning portrayal of Sherlock Holmes in the BBC's worldwide hit Sherlock and earned an Academy Award nomination for Best Actor for his role in the Historical Drama/Thriller The Imitation Game, as Alan Turing. Now amongst the most sought-after people in showbiz, he has been hailed as one of the best actors of his generation.

Cumberbatch is well known for his smooth baritone voice and memetic cheekbones. The Times has described his voice as a "jaguar hiding in a cello", and the Jaguar marketing team agrees

An unlikely sex symbol, he landed the #1 spot on The Sun's "Sexiest Man Alive" list two years in a row in 2012 and 2013 (apparently he "hadn't taken anything less seriously in all his life") by a landslide thanks to his devoted fanbase. He was also hailed by Empire Magazine's 50, 000 international readers as "World's Sexiest Actor" in 2013. It looks like brainy is the new sexy after all!

In 2014 he won an Emmy for Sherlock Series 3, and in 2015 he was made a Commander of the British Empire (CBE) for his services to the performing arts and to charity. And in 2019 he finally won his first BAFTA award for best actor for his performance in Patrick Melrose.

He married longtime friend Sophie Hunter, an English theatre and opera director, in 2014; they have three sons.

He is also famously incapable of pronouncing the word "penguins."

This actor's work exhibits examples of: