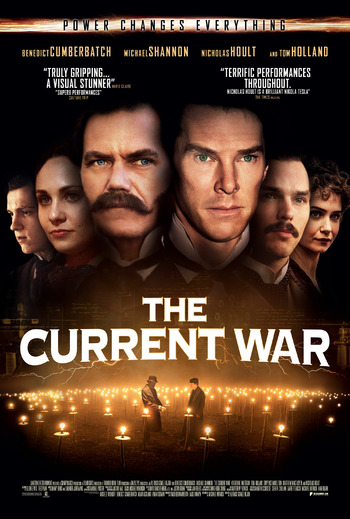 "Sometimes, we have to work outside of the rules to get what's right."
"This isn't like everything else. This is everything else. Our future isn't going to be paved with bricks, but with copper. Automation, transportation, communication. And the man that controls that current, controls that future."
— Thomas Edison
Advertisement:

The Current War is a historical drama directed by Alfonzo Gomez-Rejon about the Real Life rivalry between Thomas Edison (Benedict Cumberbatch) and George Westinghouse (Michael Shannon) over large-scale electrification. Edison's Direct Current makes a big smash as it lights up Manhattan, while the businessman Westinghouse, detecting a flaw in Edison's technology, develops (with the help of former Edison employee Nikola Tesla, played by Nicholas Hoult) Alternating Current as an alternative, setting up a bitter and cutthroat competition between the two over the future of electricity.

The Current War contains examples of: