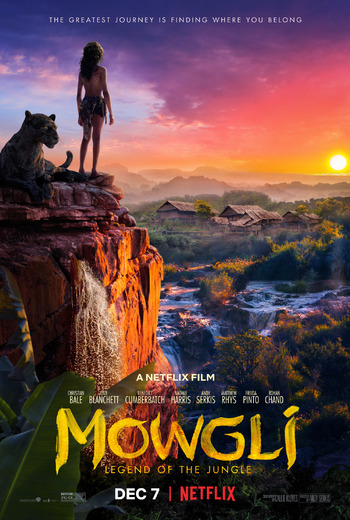 "I think we can both agree, Mowgli, that you are something the jungle has never seen before."
"I'm not a man. But neither am I a wolf. Which of you will follow me?"
— Mowgli
Advertisement:

Mowgli: Legend of the Jungle note formerly titled Jungle Book: Origins, then Jungle Book, and then Mowgli is a Live-Action Adaptation of Rudyard Kipling's The Jungle Book, produced by Warner Bros. and directed by Andy Serkis.

While not to be confused with Disney's 2016 live-action remake of their 1967 adaptation, the two movies interestingly share a couple of similarities, namely that both feature a cast consisting mostly of CG motion-captured animals voiced by an All-Star Cast, and both have the character of Kaa be voiced by female actors.

The film had a limited theatrical release in November 2018 and became available on Netflix as of December 7, 2018.