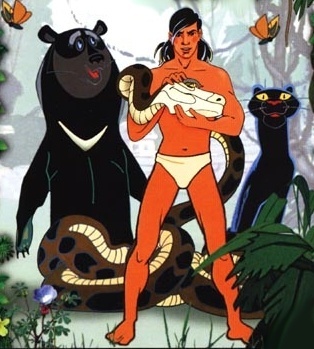 Mowgli of the Motherland

Adventures of Mowgli, known simply as Maugli, was a Soviet animation that was released behind the Iron Curtain from 1967 to 1971 as an animated series consisting of five episodes. It was later compiled into a single movie in 1973. Obviously, this is an adaptation of Rudyard Kipling's The Jungle Book, which follows it more closely than its American counterpart released around the same time.

In 1996, it was given an English dub with a hodge-podge of recognizable voice actors, including some of The Ocean Group's alumni (such as Ian James Corlett and Scott McNeil as Mowgli and Shere Khan respectively), Sam Elliott as Kaa, Dana Delany as Bagheera, and narration provided by Charlton Heston.

Tropes pertaining to the Soviet adaptation