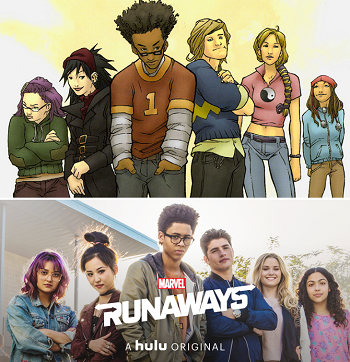 From ink and paper to flesh and blood.
"There's no better way to make a decent creation look stupid than to make a real guy dress like it!"
— The Head Executive of Platypus Comix, Scrambled Eggs
Advertisement:

In the West, many animated series have to run against the Animation Age Ghetto; one way to get around this and attract a wider audience is to do a live-action version of something originally animated. Even if it utilizes CG and special effects, this will sometimes strip the show of its perceived "cartoonishness". This is also a common device when a live-action movie adaptation is made, which will already be accused of leeching ideas from an older show.

Depending on how the adaptation is done, it may be successful. However, some suffer from Special Effect Failure and end up the film equivalent of a Porting Disaster.

A noticeable example is the Super Hero genre, where the outlandish, colorful nature of the genre seems most fitted for animated form. Yet despite animation gaining a bit more respect nowadays, most theatrical adaptations of superheroes are live-action, with varying levels of success.

One thing that has dramatically changed since the CGI creation of dinosaurs in Jurassic Park is the ability to visualize things that would have only been realistically possible in animation, such as Humongous Mecha.