Recap / Asterix at the Olympic Games 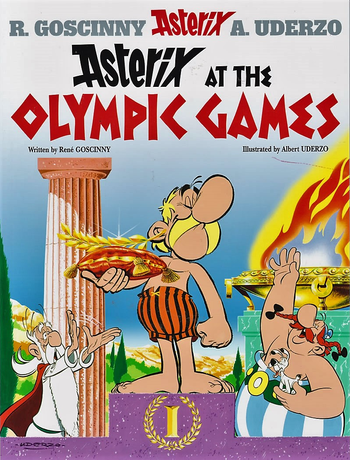 The twelfth Asterix book was published in an Olympic year, 1968, and so the stage was set for Goscinny and Uderzo to poke fun at the world of competitive sport.
Advertisement:

The Roman camp of Aquarium are in high spirits, as their own legionary Gluteus Maximus has been chosen to take part in the Olympic games for Rome. Centurion Gaius Veriambitius hopes that by bringing back a Palm of Victory, they'll receive rewards from Caesar. Maximus goes out to train in the forest, and bumps into Asterix and Obelix. The Gauls' potion-powered antics put Maximus off his stride, sending the legionary into a depression. Veriambitius goes to the Gaulish village to complain about these unprovoked attacks, but all this accomplishes is inspiring the Gauls to take part in the Olympics themselves. Even pointing out that the only outsiders allowed to compete are Romans doesn't stop them; Gaul is part of the Roman Empire, isn't it?

A qualifying race proves indecisive as all competitors are tanked up on magic potion and finish together, so the chosen athletes are Asterix (for giving the Gauls the idea to compete in the Olympics) and Obelix (because of his strength). The men of the village take a boat to Greece in high spirits - once they get over discovering that the reason passage on the boat was so cheap is because they will be doing the rowing. They encounter Redbeard and his pirate band along the way, and the pirate captain decides he'd rather scuttle his own ship than face an entire village of Gauls - only for the Gauls to opt out of attacking the ship when the captain of their own vessel tries to charge them extra for the privilege!

With the Gauls' arrival, morale in the entire Roman delegation collapses completely, and they stop training and start eating rich food and getting drunk on a regular basis... which sits badly with the Greek athletes in the Olympic village, who find a Spartan diet far more difficult to stomach when the smell of a far more delicious alternative wafts through the room. However, when the Olympic magistrates lodge a formal complaint against the Romans and remark that performance-enhancing stimulants are strictly banned at the Games, Veriambitius realises this includes the magic potion, and the Romans resume their training after breaking the news to the Gauls. Vitalstatistix contemplates withdrawing from the Games, but Asterix insists on competing in the track events without the potion (Obelix, however, is forced to bow out thanks to the permanent effects of the potion after he fell into a cauldron of the stuff as a baby), and embarks on a more traditional training regimen.

At the Games, the Greek athletes sweep not just first place, but second and third place in every single event, as it becomes apparent that Asterix and the Romans — who are warriors first and foremost, with only a little athletic training — can't even begin to compete with the Greeks, who spend their entire lives training for these games. The Olympic Council, fearing the consequences for the country's tourism industry if yet another Games ends with the Romans failing to win even a single event (without income from tourism, their buildings would fall into ruin, and then who'd want to look at them?), creates a 'Roman only' foot race. Meanwhile, Asterix and Getafix launch their own plan; right next to the Romans, the two stage a loud conversation on where they're keeping a cauldron of magic potion and how unguarded it is. And the Romans are interested...

At the event, the Romans do well; superhumanly well, in fact, as they lap Asterix and all cross the finish line at exactly the same time. Getafix files a formal accusation of cheating against them, alleging that they are doped to the gills on magic potion. Asterix defiantly sticks out his tongue at the Romans, who respond by sticking out their tongues - which have all turned blue. Getafix reveals that blue food coloring was added to the cauldron, and with their cheating exposed, the Romans are disqualified. As the only athlete not to take magic potion, Asterix is declared the winner. The Gauls return to their village (though not before another encounter with the pirates, with the usual results) and have their feast, and Asterix confides to Getafix that he gave his Palm of Victory to someone with more need. In Rome, Gaius Veriambitius and Gluteus Maximus present the Palm of Victory and reap rewards from Caesar.

Note: This story marks the debut of the Gaulish village's oldest inhabitant, Geriatrix.

The comic book was adapted into a live-action film in 2008, with an All-Star Cast including Clovis Cornillac as Asterix, Gérard Depardieu reprising the role of Obelix from the previous films, Jean-Pierre Cassel as Getafix, Alain Delon as Julius Caesar, Benoît Poelvoorde as Brutus, Alexandre Astier as Mordicus, and many more.

“These Greeks are crazy!”