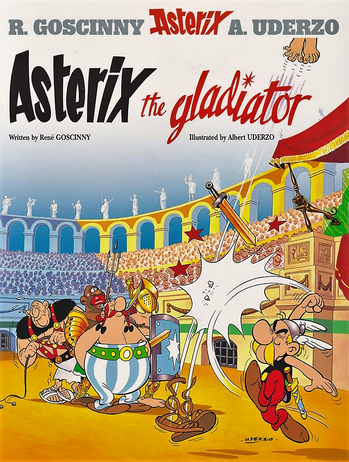 The fourth Asterix book sees the re-appearance of Julius Caesar, as Asterix and Obelix meet him on his home turf: Rome. (It has the first of four appearances of Brutus in the series as well.)

Odius Asparagus, prefect of Gaul, visits the fortified camp of Compendium and announces that he wants to bring a unique gift back to Rome for his next audience with Caesar, and has had a brilliant idea: he'll take him one of the indomitable Gauls from the nearby village as a prisoner. The only villager the legionaries are comfortable trying to kidnap is the bard Cacofonix, who happens to be in the forest in search of inspiration. The first attempt fails when he starts singing, sending the Romans running, but they stuff their ears with parsley and the patrol leader ends up capturing the bard single-handedly (the others couldn't hear his orders through the parsley) when he unwisely removes his parsley and has to thump Cacofonix to stop him from singing again.

But the kidnapping has a witness: the young boy Picanmix, who rushes back to the village and tells Asterix what has happened. Asterix relays the news to Vitalstatistix, and the Gauls descend on Compendium and thump an explanation out of the centurion, Gracchus Armisurplus: Cacofonix is already on a galley to Rome as a prisoner (and thoroughly Bound and Gagged after he tries lifting the galley slaves' spirits with a song). Never ones to let a fellow Gaul be put in danger, Asterix and Obelix flag down the first ship that passes the beach near their village, a ship belonging to Phoenician merchant Ekonomikrisis, who happens to be going to Rome and agrees to take the two Gauls. He is secretly planning to sell them as slaves when they arrive, but when Asterix and Obelix thrash the pirate crew of Captain Redbeard (making their first appearance in the series) when he tries to board the merchant's ship (the other Phoenicians being too busy debating the terms of their contract to rise to the occasion), he is happy to let them remain free men.

In Rome, Asparagus presents Caesar with his "present". Caesar's lanista (trainer of gladiators) Caius Fatuous decides that Cacofonix is too weak to be a gladiator, but will make excellent food for the lions. Asterix and Obelix arrive shortly afterward, and befriend Gaulish restaurateur Instantmix, who, upon hearing that they're looking for a kidnapped bard, tells them to meet him in secret at his flat that evening. To pass the time until then, Asterix and Obelix visit the local baths, which are also being patronised by Caius Fatuous. The lanista is immediately interested in recruiting the Gauls as gladiators, especially after seeing Asterix thump a masseur after a misunderstanding (which gets the Gauls thrown out of the baths).

That evening, the two Armoricans meet Instantmix at his flat (inadvertently provoking a loud argument among the other residents of his building in the process), and learn both that Cacofonix has been imprisoned in the Circus Maximus and will be thrown to the lions in a few days and that Caius Fatuous is on the lookout for indomitable Gauls to train as gladiators for the arena. Sure enough, some of Fatuous' hired thugs try to ambush the Gauls as they leave, to no avail, and Asterix and Obelix book into an inn near the Circus. The next day, a circus guard barges into the inn to get parsley to stuff into his ears; Obelix takes the direct approach and asks where Cacofonix is being kept and is answered immediately (much to a baffled Asterix's surprise), and he and Asterix head into the Circus Maximus, only to discover the bard has been transferred to another cell after complaints from the other condemned prisoners. They are forced to leave when the alarm is sounded, and when word gets back to Fatuous, he is more determined than ever to recruit the Gauls as gladiators.

Fortuitously, the duo are already interested in becoming gladiators after Instantmix tells Asterix and Obelix that only condemned men, lions, and gladiators can get into the circus, so they decide to track down Fatuous (not knowing that he is a gladiator trainer, only that he enjoys visiting the baths and may be able to answer their questions about becoming gladiators) while remaining cheerfully oblivious to the numerous squads of thugs he is sending after them and the 10,000 sestertii reward he offers for their capture. Fatuous is delighted to get the Gauls into his employ, and hands them over to his deputy, Insalubrius, for training. Needless to say, they handle their formal training a bit differently than most would-be gladiators; Insalubrius is so broken down by the experience that he resigns, while Asterix gets the other gladiators more interested in playing atrium games (we would say "parlour games" today) than fighting each other.

By the day of the games, Fatuous' other gladiators confide in Asterix that they no longer want to be gladiators at all, so he promises to get them released, and he and Obelix visit the other person whose release they are planning to secure, Cacofonix, to explain their plans. The games open with a chariot race; one of the charioteers is taken ill after having too much to drink, so Asterix and Obelix take his place and win easily after Obelix grabs the chariot of the erstwhile race leader and holds onto it until Asterix crosses the finish line. The audience loves it, so Caesar is happy, but things go downhill when Cacofonix is brought out to be thrown to the lions... and clears the entire circus of people and lions alike when he starts singing, and he refuses to stop until he is forcibly dragged away again by the guards.

When the gladiators enter the arena, they drop their weapons and begin playing one of the atrium games Asterix taught them. The enraged Caesar orders them to get on with the fighting, and Asterix suggests that instead of making the gladiators fight each other, which they no longer want to do, the Roman leader should send his crack legionaries into the arena, and the two Gauls will fight them. Caesar agrees, and the legionaries are duly thumped (as is Cacofonix when he tries to inspire his countrymen with a song). The audience are back in high spirits again, so Caesar agrees to grant the Gauls any request they like. They ask for Cacofonix to be freed, the other gladiators to be released from their contract, and Caius Fatuous to be loaned out to them for their return to Gaul. Caesar grants every request, as he is more than happy to get rid of the unwitting instigator of his recent humiliation for a while. The Gauls put Fatuous to work on the Phoenicians' ship, showing him what it's like when someone lives off of your muscle by having him row them home solo (stopping for just long enough to sink the ship of Redbeard and the pirates again). The Gauls return to their village, have their feast...

...and Cacofonix still gets Bound and Gagged.