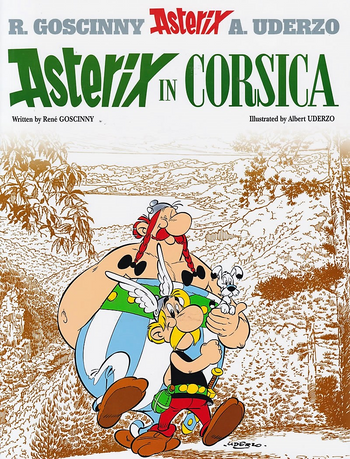 Each year, the Gaulish village celebrates the anniversary of the victory over the Romans at Gergovia by storming one of the local Roman camps and bashing in everyone they see. In this, the twentieth Asterix book, they have invited friends from all over Europe as seen in past adventures to join in this custom.

The Romans, however, are now wise to the Gauls' chosen method of celebration, and leave on manoeuvres in the surrounding countryside until the celebrations end. However, the Totorum garrison's attempt to leave is thwarted when the captured Corsican chieftain Boneywasawarriorwayayix is delivered to the camp by his three escorts, where he is to be left overnight. Totorum centurion Hippopotamus, terrified of facing the Gauls and their friends, tries unbinding the Corsican and telling him he is free to leave — however, he's in the middle of his siesta, and is going nowhere until he's had his rest. The Gauls and their friends storm the camp, and are amazed to discover the Corsican chieftain just waking up from his siesta.

Boneywasawarriorwayayix is invited to join the celebratory banquet, after which he plans to return to Corsica. Asterix and Obelix go with him to learn the ways of the Corsicans, and they head south to Massilia and charter a boat. The boat happens to belong to Redbeard and his pirate band, who don't realise their passengers include Asterix and Obelix until they have put out to sea, at which point they abandon ship.

The following morning, Boneywasawarriorwayayix invites the Gauls to share his Corsican cheese, but they are put off by its powerful smell. The Corsican chieftain is soon distracted by the realisation that they are just off the shores of Corsica, and he leaves the cheese behind, dives overboard, and swims to shore with Asterix and Obelix. Their arrival triggers suspicions in a local Roman patrol, but they find nothing when they search Redbeard's ship. Redbeard and his crew return shortly afterward, and when the captain grabs a torch to investigate the smell coming from below deck, the ship is blown to pieces.

Redbeard is captured and taken to the town of Aleria by overeager legionary Courtingdisastus, who presents him to the local Praetor (governor), Perfidius. The Praetor is horrified to hear that Boneywasawarriorwayayix has returned, knowing that his presence will energise the Corsicans to re-take the loot he has confiscated from them for Rome (the reason he was captured and exiled to begin with), and he orders Courtingdisastus and ten "volunteers" to re-capture the chieftain. Meanwhile, certain that the mission is doomed to failure, he secretly makes plans to load the loot onto a boat and flee to Rome.

Asterix and Obelix arrive in Boneywasawarriorwayayix's village, where they learn of the internal strife among the Corsicans caused by vendettas... even though most of the villagers are too young to remember what started the vendettas, they know it's serious enough to keep fighting them. Courtingdisastus' party arrives to re-take the chieftain, but their leader makes the mistake of asking for information from Chipolata, the sister of Boneywasawarriorwayayix's second-in-command Carferrix. Carferrix is fiercely protective of his sister's honour, and considers even talking to her without his permission a slight against it; the Romans are terrified into leaving.

Meanwhile, Boneywasawarriorwayayix and the Gauls make their way through the maquis (the dense Corsican forests, in which it is notoriously easy to get completely lost) to a meeting of Corsican chieftains to discuss temporarily setting aside their differences (particularly Boneywasawarriorwayayix's long-running feud with rival chieftain Olabellamargaritix) to unite against their common enemy: the Romans. They plan to attack Aleria to retrieve the loot the praetor has confiscated from them. Perfidius' attempt to load the loot onto a boat falls apart when he recruits a group of Corsicans to do the heavy lifting, not reckoning on their laziness (in twenty minutes, all they have loaded is a tiny amphora), and the other Romans soon discover his deception. He is therefore still in Aleria when the Corsicans and their Armorican guests descend upon it to recover their loot.

Boneywasawarriorwayayix makes a defiant speech to the defeated Perfidius, telling him that Corsicans will never bow to an emperor unless he is another Corsican. The common enemy defeated, the chieftain seems about to resume his feud with Olabellamargaritix until Asterix intervenes and persuades them to settle the fight peacefully (though it is implied the peace between the rival Corsican chieftains may prove short-lived). The Corsicans and their guests celebrate their victory over the Romans with a feast, after which Asterix and Obelix return to their village for the book's third celebratory banquet.

"These Corsicans are Crazy!"