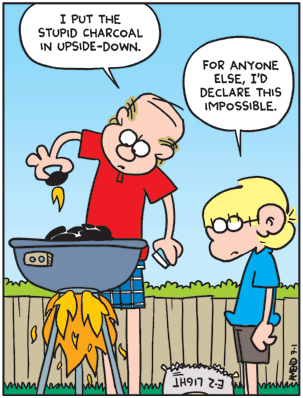 Well, he did open the wrong end of the bag.
"In the course of my life, I have more than once been too ignorant to know that something was impossible before I did it anyway."
— Antillar Maximus, Codex Alera
Advertisement:

In a world bound by laws of physics, some things are just impossible. Even when magic is involved, there are often limits.

Despite this, somehow there's someone who can do things thought impossible, simply because they do not realize that they should be incapable of the achievement. Any of the characters might occasionally be And You Thought It Was a Game, but it can be a recurring trait for a Genius Ditz or a Bungling Inventor. This trope focuses on the times the character in question achieved what they did largely because they had absolutely no idea that it was supposed to be impossible.

In contrast to many cartoons, which consistently (and inconsistently) apply and dismiss physics for the Rule of Funny, this trope is typically meant to occur when the act in question goes against whatever physics are firmly established within The 'Verse. Generally, the best way to tell the difference is whether or not the Achievement in Ignorance can be lampshaded or not.

This can be played either seriously or for laughs. If for comedy, it is often The Ditz who does the undoable deed. If for drama, the character in question may be a genius or prodigy in their particular field.

This happens in Real Life, usually with things like math or physics equations and occasionally with feats of daring that the accidental daredevil hasn't been told are life-threatening. On the more mundane side of things are people learning or successfully trying things their more learned peers were taught couldn't be done.

Compare with these tropes:

May lead to a How Unscientific! moment. A Snipe Hunt may occasionally end this way. See also Magic A Is Magic A, which the perpetrators of this trope tend to violate. This trope may be the reason for the idea that Idiots Can Not Catch Colds.

When Homer's sector is experiencing a meltdown, Homer is forced to pick a button at random in order to stop it. He ends up being the luckiest person there is.

When Homer's sector is experiencing a meltdown, Homer is forced to pick a button at random in order to stop it. He ends up being the luckiest person there is.